At first there were just occasional Indians who tarried briefly from time to time to camp and hunt and fish, and then pass on. It was not until Colonial days, probably about 1727, that the first Indian settlement was made in the Valley, near the confluence of Mill Creek and Loyalhanna Creek. The village was still relatively new when the first traders came in 1732.

View of the reconstructed fort from Ligonier Cemetery.

In the next quarter-century the great struggle for mid-America developed between the English and the French. The showdown came in what is now known as the French and Indian War. In 1758, after several fruitless attempts to drive the French out, the English mounted a full-scale campaign. Gen. John Forbes commanded the expedition which drove through the woods and mountains of Pennsylvania, setting up a series of forts to strengthen his hand for the final blow: the attack on Fort Duquesne at the juncture of the Monongahela and Allegheny Rivers. One of the forts was named for the commander-in-chief of the British Army, Field Marshal Lord John Ligonier.

Alarmed at the approach of the British, the French and their Indian allies decided that the best defense was a good offense. On October 12, 1758, they attacked Fort Ligonier — approaching from the southwest. There were about 1,200 French soldiers and only a few hundred Indians. (Many of the Indians had returned home to prepare for the approaching winter.)

The French and Indians who attacked Fort Ligonier were under the command of DeVitri. They began firing at 11:00 A.M. and the battle lasted until 3:00 P.M. After a spirited encounter, the French and Indians were beaten off with a heavy loss and they fled back to Duquesne. The British troops, under Gen. Forbes and Col. Washington, pressed on after the Ligonier victory; when they arrived at Duquesne, they found the fort afire. The French, after the Ligonier incident, realized they were beaten – so they retired northward. Thus, with good cause, Ligonier is called “the Key to the West in 1758.” The victory at Ligonier was the turning point for the British. They established their own fort, named it for Prime Minister William Pitt, thus gave birth to the city of Pittsburgh, and made mid-America English instead of French.

Fort Ligonier functioned for a few more years. Arrangements were made with Gen. Arthur St. Clair, of the British Army, to serve as caretaker of the facility since he lived only a short distance away. It was from this base that St. Clair launched a 35-year career of glory, sacrifice and heartbreak which was to encompass the founding of Westmoreland County, a generalship in Washington’s Revolutionary Army, a presidency of the Continental Congress and governorship of the Northwest Territory.

Increasing ferocious Indian attacks during the Revolution led to the construction of a second fort in 1777, sometimes known as Fort Preservation. It was located somewhat east of the original fort and served as a refuge for the settlers. By the end of the Revolution, it had outlived its usefulness and was allowed to fall into disrepair. A few years later it disappeared altogether.

There were only a few families in the Valley when John Ramsey laid out a town in 1817, taking advantage of the new Philadelphia – Pittsburgh Turnpike. Stage coaches stopped and hitched their horses at hitching posts around what is now known as “the Diamond.” Passengers obtained food and supplies in local stores. Local farmers came to trade their produce for supplies and to hear the latest bits of news. Ramsey’s basic plan covered only four blocks around the public square, the Diamond. The town grew slowly and became an incorporated borough in 1834, and eventually thrived as the crossroads of the Valley and the shopping center for the farmers of the area.

Ligonier has been a source of constant attraction for many years. The Diamond offers a quiet respite or interesting shopping in our quaint shops. Natural beauty and clean air make for a healthy atmosphere in which to live, work and play.

Ligonier, Pennsylvania, located at the intersection of Routes 30 & 711 in Westmoreland County, is separated from the outside world by two massive, but not spectacular mountains. Laurel Mountain to the east and Chestnut Ridge to the west make Ligonier Valley a clearly defined entity; the two mountains permit very few roadways so that the Valley, in effect, is protected by two great walls, ten miles apart and about twenty-five long.

Ligonier Valley has been a source of constant attraction for many years. There is much to see and do in our midst or we offer a tranquil respite from the fast-paced tempo of living today.

The brief information herein has been found in various editions of “Ligonier – The Town and the Valley.” 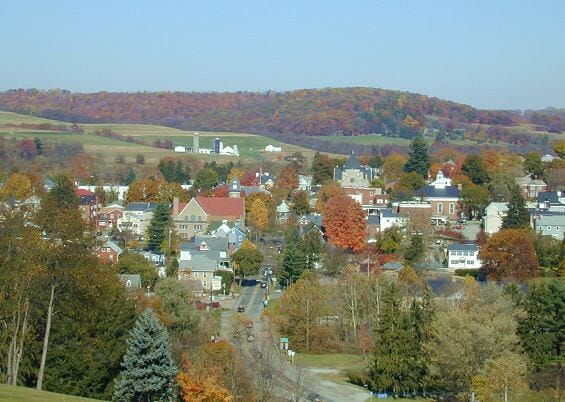 Looking North over the beautiful town of Ligonier
Scroll To Top